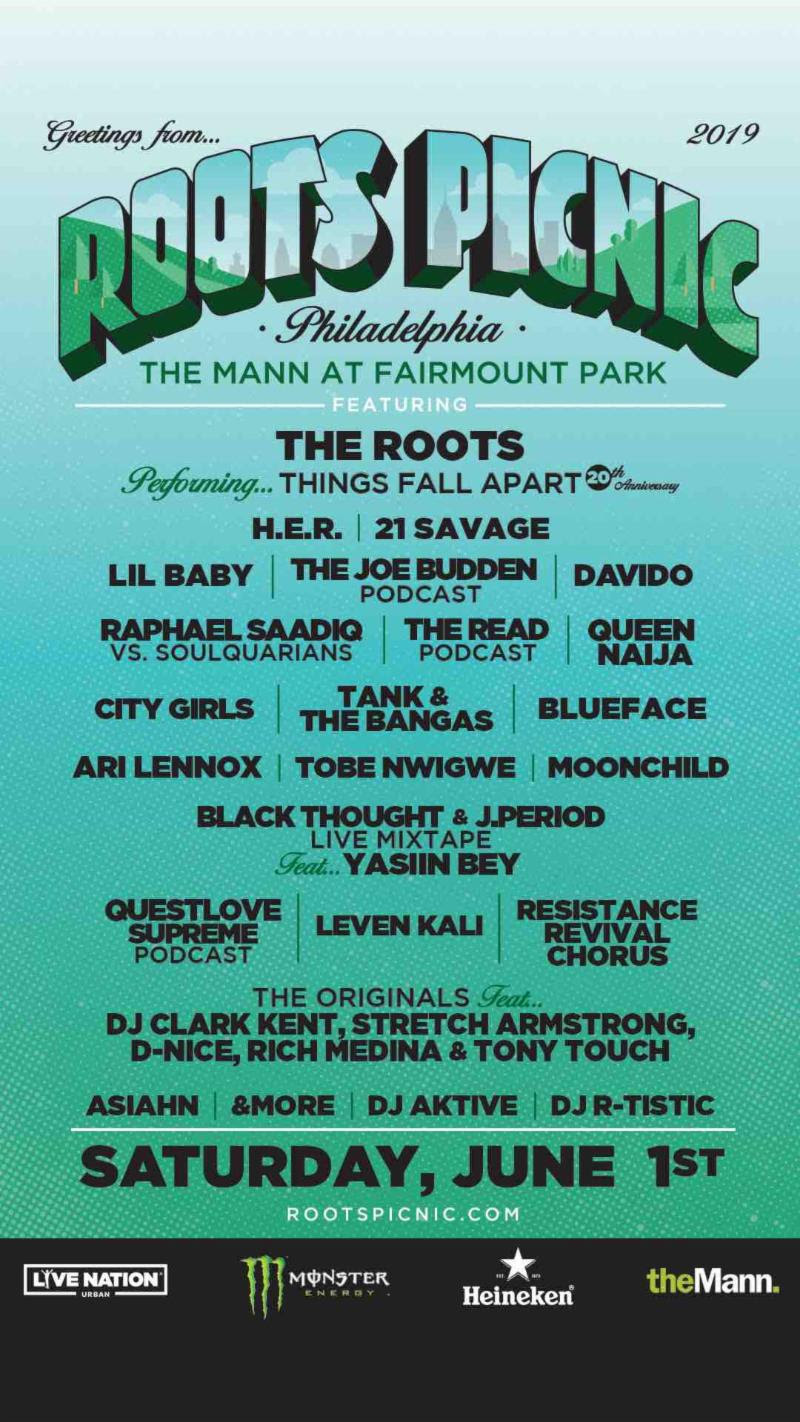 Celebrating its twelfth-year anniversary, the festival expands to a larger location in the coveted Fairmount Park area in Philadelphia, using the Mann Center as its hub, the new festival grounds will include 3 stages of music, gaming, art and dialogue. The festival continues to align with music and culture and remains known for careful curation that unites music’s hottest acts, influencers, tastemakers, and thought leaders for one unforgettable day—and this year proudly continues that tradition.
Once again, The Roots raise the bar with their flagship festival. The groundbreaking GRAMMY® Award-winning multiplatinum hip-hop collective will headline the proceedings and celebrate the 20th anniversary of their seminal album “Things Fall Apart.” In true Roots Picnic fashion, this year will remain just as unpredictable, undeniable and unique as the Roots themselves. The day includes performances from artists such as H.E.R., 21 Savage, Tank & The Bangas, Lil Baby and many more as well as a bevy of one-of-a-kind moments exclusive to “Roots Picnic” including Black Thought’s “Live Mixtape” featuring Yasiin Bey and a first of its kind Jam Session curated by Raphael Saadiq and Questlove, titled “Soulquarian vs Raphael Saadiq”. As well as a live podcast experience including episodes of The Joe Budden Podcast, The Read Podcast and Questlove Supreme.
“We finally have a Roots Picnic in the Park,” said Shawn Gee, the Roots manager and President of Live Nation Urban, “the vision 12 years ago was always to provide an all day musical and cultural experience in Fairmount Park. Black Thought, Questlove and I grew up spending our Sunday afternoons at the Belmont Plateau in Fairmount Park watching Philly DJs spin, and enjoying the vibe and the culture. It’s a great feeling to be able to come full circle and bring the Picnic to Fairmount Park, I think it’s a big WIN for the city.”

The annual “Roots Picnic” festival remains just as unpredictable, undeniable, and unique as The Roots themselves. Since launching in 2007, it has stood at the crossroads of music and culture, entertaining, engaging, and enlightening millions of fans along the way. Its dynamic lineups have included everyone from The Weeknd, Pharrell, Snoop Dogg, Phantogram, Usher, Nas, A$AP Rocky, Macklemore & Ryan Lewis, and Future to Vampire Weekend, The War On Drugs, Gary Clark, Jr., Solange, Diplo, Gnarls Barkley, and more. “Roots Picnic” isn’t just a cornerstone of the group’s career, but a cornerstone of the culture.