Fresh off signing to Hopeless Records, Chicago-based singer/rapperdying in designer has shared a brand new music video for his hit single, “Lately” via Sad Chill – a leading discovery source for the emo trap, bedroom pop, and chill vibes. Fans can watch it now here: smarturl.it/LatelyMusicVideo.

On “Lately” – the first track to hit over a million streams, dying in designer Bobby O’Brien laments, “This was my worst fucking year. I could drown in my own tears.” Stripping out all pretension and leaving raw vulnerability, dying in designer admits freely to dealing with suicidal thoughts.

“Lately was written like a suicide note. I was in a very toxic relationship, which put me in an extremely dark place,” he shares. “I want to help people who feel the way I have felt. I want to be a role model to these broken kids around the world. I want these kids to know that it’s okay to feel down sometimes – emotions are real and will always be universal. I want my music to save lives.”

For Chicago-based singer/rapper, dying in designer, 2018 was the hardest year of his life. Fully-consumed by a toxic relationship that ultimately led to immense pain, heartbreak, depression and suicidal thoughts, vocalist Bobby O’Brien, used every ounce of pain and sorrow to create music that pulled him back into the world. The result is a lyrically gut-wrenching, honest, raw portrait of emotion backed by catchy melodies, cathartic 808s and breakdowns. 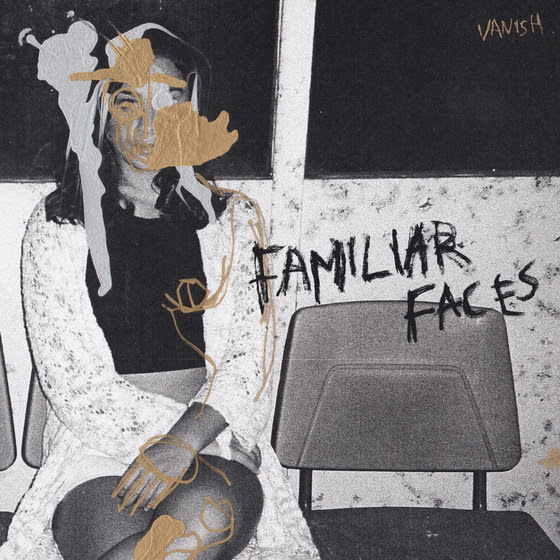 Home Away From Home: Vee Castillo Breaks Down Her Partnership with Bud & Breakfast

On today’s release, the band shares “We are very grateful for the support we’ve received along the way that allowed us to create this album and we’re extremely proud of the result. We hope there’s something on this album that anyone could relate to and enjoy.” Previously released singles “Role Play”, “I’m All Out of Swipes”, “dontwaitforme” and this week’s “Under Water// On Fire” have all been seeing incredible success at radio and streaming services. With adds to Apple Music playlists like Breaking Hard Rock, Spotify playlists like Crash Course and The Scene, Music Choice’s Emo x Screamo Channel, SiriusXM’s The Emo Project and idobi Radio, fans worldwide have been able to discover this exciting young band.
Familiar Faces is available to stream and purchase today at smarturl.it/vanishmerch.

1. Ouija Cult
2. Somebody Else
3. Role Play
4. Familiar Faces
5. The Sound of Violence
6. dontwaitforme
7. Under Water // On Fire
8. I’m All Out of Swipes
9. Slip
10. Distance, Disappear
Inspired by early ‘00s cabaret-esque post-hardcore, modern trap and musicians more likely to spill their guts on a stage floor than to hide behind a microphone, the members have never fit in with their peers and don’t intend to with their music. “I remember going to shows and seeing bands being super dull on stage, then seeing [those] who would go onstage and put everything into their performance. I never wanted to be someone who didn’t look like he was portraying what he’s saying,” says vocalist Pat Hamilton, effectively explaining both the Vanish live experience and the stinging emotional honesty in their music.