Pipes in the late sixties fell into two categories—threaded and carved, wood or stone. Both pipes used replaceable screens that would easily clog, making it very difficult to get that magic puff. Threaded pipes were made of brass lamp fittings whose threads easily would tar up, seizing the pipe. The carved wood/stone or the traditional corncob pipe had a 90-degree smoke path under the bowl making it very difficult to clean once it clogged.

In 1968 I had one of those Eureka moments a few months after my first puff of that magic medicine. Gadgets were in, James Bond had them, how about one for us? How about a special pipe designed to do only one thing perfectly, smoke weed! A pipe designed with the right tools, like a poker! Car keys don’t work for that. How about a permanent screen?  While I’m designing this, a cleanable tar trap. Just to make it the ultimate pipe, how about adding a storage pod. So off I went chasing my pipe dream.

At the age of 20, I had a full-time job working as a draftsman/model builder in an Architectural firm. Also being an artist, I loved tools, machines and creating new things– little did I know that these crafting hobbies would lead me to design an iconic pipe. So, when I first saw a Unimat, I just had to have one. A complete all metal construction table top machine shop about the size of a sewing machine that turns, cuts, drills and sands; with accessories it was almost $500.00, which was big money back then. When I finally acquired this machine, I could take my first steps to fulfilling my pipe dream and I had always longed to live in the Country. I began machining prototypes with new and more useful features. After about a month of mistakes and corrections, I had a palm sized custom designed weed pipe. When showing off my new pipe design, friends and fellow tokers always gave positive reviews and wanted one, so I knew I was on to something good. The world was turning on and I was sure marijuana would be legal in a few years. When the Whole Earth Catalog was released in ’68, it was very exciting to see earth friendly tools, lifestyle choices, and new architecture emerge. I felt the epicenter of this new movement was in Northern California; San Francisco Bay Area had many radical thinkers and living in Denver I knew I couldn’t launch there.

In 1971, I decided to move to San Francisco in the Mission District to become submerged by this new culture. The first pipe was called the smoking Contrivance–it would become pipedream 1.0. After a year of learning how to scale up and have consistent production, it failed to materialize. Desperate for money, I got a carpenter job and took a gamble when I placed an ad in the Rolling Stones Magazine in 1972. I recall paying 200 dollars and after a month only had a few orders. A few months later, my brother Kent called to say my post office box was stuffed with orders, so I made pipes on the weekend to fulfill orders, but I had a commitment to my carpenter job. A year later, I finally had time to fully commit to my pipe dream.

In 1973, I made a batch of pipes using a gas generator for power and took them to Berkeley’s Telegraph Ave. I became a street artist, and it made enough to put a roof over my head. My brother Richard joined me from Los Angeles, and he began street sales in SF. Richard made the second contrivance pipe, specifically made for a left-hander. The contrivance was selling well, but as it gained public attention trouble began. While on the street one day, I was approached by an investor who wanted to market my design, when in reality he was actually trying to steal it. I gave him 50 pipes to help market the pipe, and they soon began showing up in headshops all over the bay area in tin cans labeled as a Tomato! What a stupid gimmick idea, but it did wake me up to the fact that the name contrivance was also pretty stupid.

Lamenting my sorry state one night, a friend misspoke the word prototype pipe and said Proto Pipe and I grabbed it–the perfect name for this unique pipe. I borrowed the logo design from Rolls Royce and silk screened a beautiful pipe display stand to knock off, the knock off. Soon the Proto Pipes’ were in shops all over the Bay Area. Larry Todd, a famous underground comic artist joined our team, and we quickly outgrew the 2,000 sq. ft Oakland warehouse. We had been acquiring new machines which included a 400 lb. version of Unimat—the Maximat.  We relocated into a larger 25,000 sq. ft space in Berkeley, which we shared with Tom Conlon who was producing electrical generating high speed windmills.

Still longing for the Country, and Ronald Reagan’s war on drugs raging on, we moved out of the warehouse in Berkeley settling in a town called Willits and bought a warehouse on Franklin Ave. Combined with our bold advertising and being the only visible part of the economy as “paraphernalia manufacturers” we were targeted and harassed by the local authorities. Not wanting to be the poster child of this war, we turned the business over to a friend who did not smoke pot and labeled it as a tobacco pipe. The only agreement was to let us back in when legalization was imminent. Proto Pipe was run successfully for a few decades but couldn’t keep up with the new technology that emerged, the internet. Coupled with no website, no new improvements to the company for years, and the newly evicted paper stamped on the front door—Proto Pipe diminished.

Fast forward to 2014, and I now live in the country off-grid. Bess, my girlfriend at the time had removed that troublesome resin trap from her Proto Pipe and replaced it with a piece of tape. When I offered her a replacement, she refused since it clogged so much. The tape created a larger resin containment zone and easy replacement or cleaning.  That’s what sparked a dramatic new improvement to this old design. Since I was pondering other design ideas, it was a good time to create a new generation of this classic design. Bess and I decided to launch the pipe with four new design improvements, a round bowl, a roach clip on the top lid, a bottom swivel lid, and knurled collar. Keeping the best qualities of the proto and improving on the old.

Skip to present day, the original team is back together in the warehouse on Franklin Ave. With new patents, pipes and team members Proto Pipe’s legacy is reshaping and becoming a future. 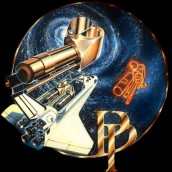