Have you ever had to submit to a drug test for a job? Often times, professionals who are well qualified for skilled positions get turned down due to their use of cannabis. Some individuals have to jump through hoops to convince their employers otherwise, which, more often than not, leads to them being skipped over for someone who does not use cannabis. Some have to fake a drug test because their livelihood depends on it.

Why does the use of cannabis dictate whether or not a skilled-worker is disqualified from work they are easily capable of? The stigma needs to end.

In June of 2018, I had to submit to a drug screening for a position I was hired for. It was the only thing standing in my way to end a long stint of unemployment. Previous to this, I spent some time in the world of Biotech, amassing a handsome set of skills while earning very high-level experience. I had been unemployed since November 2017 when my headcount was dissolved along with 13 others due to budget cuts, as the story goes for most in my position.

When the order hit my Gmail from the background check company, it was time to piss the music. I did the research, and due to the tight window of time, and the logistical challenges that come along with that, I went the synthetic route.

Synthetic urine. I’m sure some readers have gone this route before, but if you haven’t or are unfamiliar with this products existence, allow me to regale you with the tale I like to call, “The Piss Test.”

I walk into Mega Corp Lab in La Mesa, CA. I have a bottle of synthetic urine with the provided hand-warmer strapped to my inner thigh. The scene is bleak. There is nobody to greet me at the front desk, except for a tablet with self-serve software. I plug in my order number, my name, then take a seat in the crowded lobby. I wait.

This Mega Corp Lab is a huge laboratory in the US, one of the top 5. Why did I pick this place? My thinking was that this well-established laboratory probably had little to no interest in seeking to ruin innocent people’s professional conquests. This thinking did not spark joy. Why is that? Well, the process for this lab is to follow you to the bathroom, only to stand outside the door to drastically invade your private expulsion of bodily fluids. Lucky me. I was already committed, so I had no other choice but to proceed.

I entered the bathroom, dropped trou, and followed the instructions the synthetic urine company provided. I shook the bottle and emptied its contents vigorously into the provided receptacle. After handling what I thought was a for sure thing, I opened the door to see – let’s call her “Karen,” lurching in the doorway like some thirsty piss-goblin. I handed her my freshly-fraudulent cup of lies, and what happened next, I was not prepared for.

“This is not your urine.” She blurted. “It did not come from your body.” She supposed.

I retorted, “Well I’m not sure what to tell you, but that’s definitely my pee.”

And at this moment, she then locked eyes with me as she SAVAGELY took the cup up to her nose and gave it a good *SNIFF* inhale. Synthetic urine does not smell like anything, so she knew. At this point I was fucking shook, and was witnessing my newly acquired employment going down the piss yellow brick road without me.

After some back and forth, Karen had inevitably revealed to me that she actually had no inkling of a soul, and would not be accepting my sample. I was so embarrassed, and spiraling into the very depths of self-hate and self-doubt. So I did what any sane person who has been unemployed for a better half of a year would do, and went to my car to have a mid-afternoon existential crisis. My personal narrative went a little something like this:

What the fuck am I going to do?

Should I sell everything?

Should I move to Iran?

This is it, yup, this is how I become a farm wook.

Why does this woman hate me so much? Or does she hate her life so much that she needs to ruin things for others, as a means to get off?

After my mini freak out, I realized that I had to do some damage control. They’re legally obligated by the background check company to report back to HR when something weird like this happens. I get on the phone with my HR contact, let’s call her Patricia, and laid it all out for her. What did I have to lose? I was already spiraling into certain doom. I proceeded to tell her about my experience at the lab, and how I use cannabis. I brought up the legality of it in CA and asked whether or not it makes a difference to them. Turns out it doesn’t, and that a drug test needs to be submitted and passed. This individual, who had a heart of gold, understood my frustration and placed another lab order for me.

After the weirdest, most honest conversation I had with an HR person ever, the email with the new lab order came to my inbox. I wasn’t sure what I was going to do at this point. If I pissed for real, it would absolutely pop for THC. I was desperate. I reached out to my friends. Nobody was available to assist because it was a weekday and most of my friends are employed or also use cannabis. After limited deliberation (I was running out of daylight), I went back to my only option which was another shot with the synthetic stuff. After hearing my sob-story, the man at the smoke shop discounted the second batch and again, sent me on my way.

The new lab order assigned me to a different laboratory which was in close proximity to my house. I drove to the location and found more panic, as the building was empty. I reached them by phone and the man explained they had moved from that location to Santee some years ago. I told him I needed a drug test and he advised of a place down the street where I could go, “accomplish my goal.” Now, there’s no way the guy knew what was happening, but when he said those words, I felt like maybe I should listen to him. That maybe I was tapped into something bigger, and that the universe was speaking to me through him. He gave me the name of the New Place, and off I went.

I pulled into the parking lot and prepared myself. The bottle is again, strapped to my inner thigh with the provided hand-warmer. As I walked into the New Place, an overarching feeling of ‘calm’ ran over me. I take notice of my surroundings. There were much less people in the lobby waiting. There was a bell to ring for service. There was an actual human being behind the counter, instead of a sign-in tablet. I was in great spirits, and determined to make it work this time around.

After putting my name down, this time with a pen and paper, I took a seat and waited, patiently. Eventually they called me back. I did a quick observation of their back area, I saw that the techs are sitting down in front of their computers and no one’s by a bathroom door. I immediately felt at ease. The individual who took me back was finishing my paperwork when he handed me the sample cup and told me to go to the bathroom. He did not follow me this time.

Let’s rewind for a second. What I didn’t mention earlier was that Karen at Mega Corp had made a comment to me about there not being enough ‘bubbles’ in my sample, as most male urine samples produce some element of foam. When I mentioned I prepared myself in the car prior to entering, that entailed finding a straw and stuffing it into my boxers.

I entered the restroom, and again, I dropped trou. I reached into my boxers to feel if the straw I stuffed into them in my car was still there. It was. I proceeded to shake the ever-loving fuck out of that bottle before squirting it into the provided cup, and as I mentioned earlier, I was determined to pass this time. The synthetic has no chance of failing in the lab, it just needs to look like the real thing. I put one end of the straw to my mouth and the other end into the cup of synthetic urine, and there I was, furiously blowing bubbles into this cup of yellow freedom with the hope that if the guy does a visual inspection, it passes.

I walk out of the bathroom and hand him a cup that looks visibly pissed in. He grabs it from me cautiously like it wasn’t a cup of frantic desperation, but real, actual dude piss. No scrutiny. No disdain for my existence. No immediate assumption of deceit. Just a well placed hand-off like he was the anchor on the last leg of the relay race of my life that day, and the cup of piss was the baton. A golden baton. Of freedom.

He then said, “thank you,” and sent me on my way. The combined feelings of relief, accomplishment, and happiness that became me was overwhelming, and I assure you that I 100% did a happy dance on my way to my car.

I started that job in July of 2018, and then four months later left it to pursue a career in the cannabis industry.

The moral of the story is this:

Nobody should ever have to go through that for a job they want when they are qualified for it. Employers shouldn’t make valuable, skilled workers feel like criminals for using something that is legal (in some form) in 33 states, when a federally legal and socially acceptable substance known as alcohol literally kills 88,000 people a year.

Why do we, as a society, place so much stigma on the recreational and medicinal use of cannabis, when there are other things that have much larger social detriment associated with them, but are widely accepted as normal? It boggles my mind, and that is why I have dedicated my life to cannabis, and the industry surrounding it.

I hope the lesson you took from this is not how to pass a drug test, but how to fully engage yourself in something you actually want vs. something you don’t want. Have passion for what you do, and the rest will fall in place. I also hope that I made you smile at least once, and I thank you for taking the time to read this story. 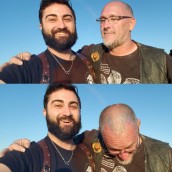 Avoid The Heartache Of Bud Rot And Powdery Mildew (part 2)