Home » Why have all the WEEDS disappeared? Back in October 2017, Skunk ran a piece on cannabis dispensary chain WEEDS Glass & Gifts. At the time, WEEDS employed almost 200 people and had close to 20 bricks-and-mortar locations across Canada plus a nationwide mail order service. Founders Don Briere and Carol Gwilt were looking to the future though and with legalisation of recreational cannabis just around the corner, it was an exciting time for the business with post-legalisation growth and expansion in mind. Both Briere and Gwilt are veteran cannabis activists who spent decades advocating for a legal recreational cannabis market in Canada and in October 2017, with legalisation almost in sight, it seemed like they were on the cusp of being owners of one of Canada’s most successful and prolific recreational cannabis companies.

If you lived in Vancouver or Ottawa anytime since 2013, chances are you remember a time when WEEDS was ubiquitous in town. Depending on the location and day of the week, a WEEDS store served anywhere between 400 and 2500 clients per day – a sizable portion of the cannabis-consuming public. Humility aside for a second, WEEDS dominated their market cross-country.Yet here we are, just two years later and with a single year of cannabis legalisation under our belts, speaking in the past tense. Naturally, people have a lot of questions about what happened as WEEDS pretty much vanished overnight. Of course people are going to talk and speculate. People have asked “where did it all go wrong?” but that’s the wrong angle to approach the store closures from. Rather, people should be asking “why have all the WEEDS disappeared?’.

Needless to say, WEEDS didn’t shut stores because of lack of customer support or because they just didn’t try hard enough to be a successful, legal cannabis business. The end goal for WEEDS was always to become a licensed cannabis dispensary and they have followed all the same steps as any other business trying to obtain a permit to open a cannabis store. When stores were open, WEEDS operated as any legal business would, paying business taxes and offering extended medical and dental benefits to employees. Everything that could be was always above board. With so much proven success, industry experience and seasoned personnel, it seemed like WEEDS might just seamlessly slip into the legal market. But that was not to be.

Of the 200 employees mentioned above, nearly all have been laid off since October 2018. The first wave of store closures and layoffs came during the same week legalisation came into effect. Instead of fully rejoicing in the fact that pot was now legal, WEEDS closed stores in Saskatoon, Winnipeg and Ottawa. The main reason why: mounting political pressure to close or run the risk of potentially never entering the legal market  ANYWHERE in Canada. We’re just going to focus on Ottawa here since the roll out of dispensaries in Ontario has been one of the more interesting aspects of cannabis legalisation, mainly because of the baffling lottery system in place there to issue cannabis retail licenses. Prior to closing their storefronts, WEEDS had three stores in Ottawa. There was some competition but all three stores were busy AF as they say. This was during prohibition and the demand for cannabis products has only increased since then. However, the number of store fronts in Ottawa has decreased. WEEDS is completely gone from the city which, at the time of writing, boasts a whole three legal stores for its residents, none of which were allowed to open before April 1st 2019. Ottawans were left high and dry for quite a while. WEEDS are entrants in the lottery but their name is yet to be drawn. A lottery might seem like a very impartial way to decide who gets to open a cannabis store but instead it has proven to be an exercise in time-wasting and disappointment. The second lottery was held in August 2019 and of the 42 names drawn, twelve were disqualified and one withdrew. These 13 applicants were unable to submit the necessary documents to apply for a retail cannabis store licence by the deadline provided during the lottery. Rather than first dealing with businesses that are good to go, Ontario is staggering store openings and wasting time with businesses that ultimately are not yet prepared to open a cannabis dispensary, often for financial reasons. What has the impact been? Lack of choice for consumers and restricted access to cannabis despite it being legal; cannabis professionals out of work and a lack of job opportunities for people who want to pursue a career in cannabis and businesses losing out on money and their slice of the market while they wait for the next arbitrary cannabis lottery. So, East Coasters, this is why WEEDS has disappeared from your part of the country. Maybe their name will be drawn one day and WEEDS will light up Bank St again. For now, it’s out of their control and since exiting Ottawa, the company has focused much of its energy on the cannabis market in Vancouver and other parts of B.C.

That brings us to the next chapter in the WEEDS saga. In May 2019, the unthinkable happened: WEEDS was forced to close up shop all across Vancouver. Although it had been a threat for months, in a way no one really thought WEEDS would close. The stores were too busy, too successful, too established to just be taken away but that’s exactly what happened. The question a lot of people asked at the time was why now and why not back in October 2018 when cannabis became legal? Why was there a delay in shutting down these WEEDS dispensaries when so many of their stores had already closed across the country? And why did WEEDS stay open even though the City of Vancouver was cracking down hard on other dispensaries in the City? The reason why: WEEDS had joined other dispensary companies in a BC Supreme Court legal challenge of the City of Vancouver’s by-laws, arguing that the by-laws infringed on a citizen’s constitutional right to reasonable access to cannabis.  The stores could stay open until the judge made their ruling decision. In May the Court of Appeal unfortunately ruled against WEEDS. Within days of the ruling, WEEDS wrapped up retail operations in Van City and laid off close to 100 more employees. It was a lousy time but development permit applications had been submitted for the four WEEDS stores in Vancouver before this so there was still some hope. Until the development permits were rejected later in the summer of 2019. If the picture hasn’t been painted yet, the past year was just blow after blow for WEEDS.

WEEDS did have a chance to appeal the rejection of their development permits for two of the four rejected applications: the store on Kingsway in East Van and the store on Main St in South Vancouver. Permits for both locations were initially rejected for not being 300m or more away from a school (the Kingsway store is about 225 m away from a school) or community centre (the Main St. store is about 80 m away from a community centre). The Main St appeal was rejected but the appeal for Kingsway was successful, meaning that in a few months there should once again be a WEEDS presence in Vancouver. Why can’t they reopen straight away? Although Vancouver has given them the green light, provincial approval is still pending and this is the final piece they need in order to start selling legal weed.

It’s not that long ago that people joked that WEEDS was growing like weeds. It’s a lame joke but it was true and that only compounds the sadness and disappointment felt by WEEDS and their employees over the past year. WEEDS didn’t disappear due to an unwillingness to tick all the required boxes to become a legal cannabis retailer. WEEDS disappeared because of a flawed and piecemeal roll out of recreational cannabis stores on a federal and provincial level. Rather than working with the grey market system in place, the government reinvented the wheel and created a market void of those who helped pave the way and, if we’re being honest, actually know a thing or two about keeping stores stocked with adequate supplies of good quality weed.

While they await licensing, WEEDS continues to run an online glass and cannabis accessories store. WEEDS has always been known for the high-end glass carried in stores (glass bongs, pipes and accessories that attracted as many admirers as their pot did) and they were recently voted the second best glass retailer in Vancouver! As a big supporter of the arts, WEEDS plans to continue showcasing glass art made by Canadian artists, online and offline. In the past, WEEDS has thrown art exhibits and earlier this year they hosted a live glassblowing public event at their HQ in Vancouver. You can view their extensive collection of glass, from UV reactive bubblers to quartz bangers and basic bongs to elaborate, artistic functional pipes and rigs at weedsgg.ca. More events are planned into the new year so despite being absent from the high street, WEEDS is still kicking! 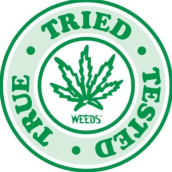 Founded in Vancouver in 2013, WEEDS is one of Canada's most iconic cannabis brands. Licensed cannabis stores coming soon!